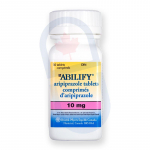 Buy Abilify 10 mg Online From YouDrugstore.com,
A Canadian Pharmacy You Can Trust.

How To Order Online?

If you suffer from depression or another mood disorder, your doctor may prescribe Abilify 10 mg. You can order this medication from YouDrugstore's online Canadian pharmacy by sending in your prescription for review by our health care team. Many medications are cheaper in Canada than in the US, and when you order this medicine from YouDrugstore.com you can enjoy the same benefits as Canadians with affordable shipping right to your mailbox.


Why purchase this prescription medicine?

When a patient has been taking their current antidepressant medication, such as Lexapro (escitalopram), Prozac (fluoxetine), Zoloft (sertraline), Paxil CR (paroxetine) controlled release, or Effexor XR (venlafaxine) extended release, for six weeks or more but they are still experiencing unresolved symptoms of depression, this medication could help. In a clinical study of Abilify, patients experienced a difference as early as a week or two after starting to take the medication. If your doctor writes you a prescription for Abilify, you may be worried about how to pay for the prescription you urgently need. Order this drug from YouDrugstore and you get genuine medication from a Canadian pharmacy with affordable shipping costs.

Doctors most commonly prescribe this medicine to patients suffering from depression, often in combination with another antidepressant medication, to treat their unresolved symptoms of depression. However, doctors may prescribe this medicine for other psychiatric conditions. Doctors may write an Abilify prescription for patients with bipolar I disorder who have manic or mixed episodes. They may also prescribe it to treat schizophrenia symptoms, on its own or in combination with other drugs, or to treat irritability in autistic children, such as temper tantrums, aggression, self-harm, or other symptoms. Your doctor may have given you a prescription for these or other medical conditions.

How does the drug help depression patients?

A study indicated that about two thirds of all patients taking an antidepressant still experienced unresolved depression symptoms. These tablets help patients by taking care of those remaining symptoms of depression. Scientists believe depression is caused by a chemical imbalance in the brain, where neurotransmitters like dopamine and serotonin are not present in the correct proportion and are unable to effectively send chemical messages. This then affects mood and emotion. Researchers think Abilify helps by restoring the correct level of dopamine and serotonin to the brain, picking up where antidepressants that affect only serotonin and norepinephrine have left off.

The most common side effects include

However, Abilify could also cause weight gain, an increase in blood sugar levels, or an allergic reaction. When patients take this drug in combination with an antidepressant, they may experience an increase in suicidal thoughts, and elderly patients with psychosis related to dementia may have an increased risk of death when taking the drug. These are not all the possible drug side effects, so be sure to speak with your health care professional if you have any concerns or if you experience unusual side effects.