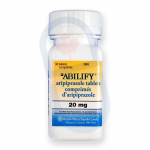 How do you fill a prescription online?

If your doctor has prescribed Abilify 20 mg for your depression or other mood disorder, you can order it online from YouDrugstore.com. Simply send your prescription for review by YouDrugstore health care experts and you can order this medication with cheap shipping right to your mailbox.

Doctors most often prescribe Abilify (aripiprazole) to patients suffering from depression. Some patients find that they have unresolved symptoms of depression even when taking their current antidepressants, so doctors might prescribe this medicine to treat those remaining symptoms. Usually doctors will wait at least six weeks to see how patients are doing on their antidepressant drugs, like Lexapro (escitalopram), Zoloft (sertraline), Prozac (fluoxetine), Effexor XR (venlafaxine) extended release, or Paxil CR (paroxetine) controlled release, before adding this drug. Doctors may also write the drug prescription for other mood disorders, such as manic or mixed bipolar I disorder, schizophrenia, or the irritability associated with autistic disorder. This could be in combination with other medications to treat the particular psychiatric condition.

How does this medication work?

Scientists believe mood disorders like depression are caused by chemical imbalances in the brain. When neurotransmitters like dopamine and serotonin are not present in the correct amounts, they are less able to send messages within the brain, which can affect mood and emotion. Doctors prescribe antidepressants to restore this balance, although most antidepressants target only serotonin or serotonin and norepinephrine. Researchers believe the drug picks up where other antidepressant medications leave off, adjusting the levels of both serotonin and dopamine in the brain. Once the chemicals are back in balance, the mood is adjusted to allow the patient to feel more normal again. Abilify clinical trials showed it improved symptoms of depression as quickly as one or two weeks.

The most common negative effects include

The drug could also cause some weight gain, an increase in blood sugar levels, or decreased blood pressure, or it could cause an allergic reaction in some patients. Most importantly, antidepressants can cause an increase in suicidal thoughts, and elderly patients with dementia-related psychosis are at an increased risk of death when taking it. Patients taking these tablets should also be cautious operating a car or other machinery until they know how the medication affects them. This is not a complete list of side effects, so be sure to discuss any concerns or any unusual side symptoms with your health care provider.

Why purchase this drug from YouDrugstore?

Canada has similar medication standards to the United States, but many different generic and genuine medications cost less at a Canadian drugstore. When you order Abilify 20 mg from YouDrugstore, you get the genuine medication you need to maintain your health, with the benefit of cheap shipping right to your mailbox.