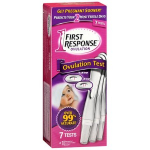 What is an ovulation test kit?

An ovulation test kit is an at-home urine test that can help a woman determine if she is ovulating. These tests work by detecting a hormone surge in the urine, predicting that ovulation should occur soon. By using an ovulation test kit, women can better predict when they are most fertile, and time sexual intercourse for then to increase their chances of becoming pregnant.

Why should you use an ovulation test kit?

Ovulation usually occurs between the 11th and 14th day of a 28-day menstrual cycle, but this can vary from person to person. Ovulation test kits can better predict when a woman will ovulate by measuring hormone levels in the urine. Knowing when you are ovulating is important information because if an egg is present, sperm can potentially fertilize that egg. You may have sexual intercourse regularly, but by specifically timing it for your most fertile days, you can increase your chance of pregnancy.

Ovulation is triggered by a rise of luteinizing hormone (LH) in a woman's body. Ovulation test kits take advantage of this spike in LH to determine if a woman is ovulating. By measuring high LH levels, an ovulation test kit can predict if a woman's ovaries will soon release an egg. When ovulation occurs, a woman is at her most fertile, with the best chance at conceiving.

When and how to use an ovulation test kit

You should follow your particular ovulation test kit's instructions for how and when to use it. Generally you should either urinate onto the test strip or into a container before dipping in your test strip. A few minutes later, the ovulation test kit will then indicate whether you are ovulating or not using a sign or symbol. If you are ovulating, you should have sexual intercourse within the next 24 to 36 hours to have the best chance at becoming pregnant. You should start ovulation testing on day five of your menstrual period, not later, which will establish your usual hormone levels to detect when your luteinizing hormone (LH) levels rise. Try to perform an ovulation test at about the same time each day, try to avoid urinating in the two hours before testing, and limit the amount of liquid you drink for the two hours before the test.

Avoid too many fluids before performing your ovulation test, otherwise the luteinizing hormone may be too diluted for your test to detect. If it is past day five of your menstrual period, do not begin testing yet. Instead, wait until your next menstrual period for the most accurate results. Once you open your ovulation test kit package, you should use the test strips within the next 30 days for the best results. If you are taking fertility drugs, such as luteinzing hormone or Clomid, it can affect the results of your ovulation test kit by raising LH levels in your urine. If you are taking drugs such as birth control pills and hormone replacement therapy pills, which contain estrogen, progesterone, or testosterone, this can decrease LH in your urine and affect your test results. Rarely, your ovulation test kit may show a false positive result, saying you are ovulating when you are not.

Ovulation is the release of a mature egg from the ovaries, and this egg then travels down the fallopian tube toward the uterus. If the egg meets a sperm, pregnancy can occur, but if it is not fertilized in the next 12 to 24 hours, the uterine lining will shed. Ovulation normally occurs once per month, and usually only one egg is released at a time. Most women will ovulate between day 11 and day 21 of their menstrual cycle, measured from the first day of their menstrual period. Women can check for ovulation by determining if their cervical fluid has changed just before and during ovulation; measuring their body temperature for a rise just after ovulation; or using an ovulation test kit or fertility monitor.