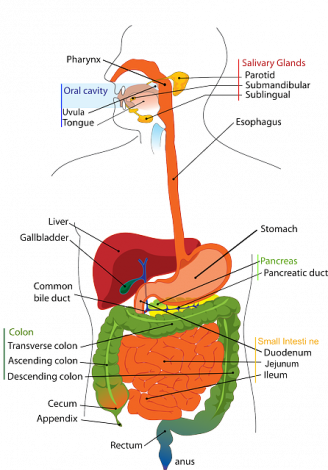 The following are the four quadrants of the abdomen:

The diaphragm is the oblong muscle that divides the abdomen below from the chest above. When it pulls down, it sets up a negative pressure in the lungs above, which are forced to expand and draw in air. Problems with the diaphragm are discussed below:

Diaphragmatic (hiatal) hernia: This can cause symptoms in the RUQ, but this condition is more aptly addressed in Part I: The Left Upper Quadrant.

Diaphragm muscle strain: This can occur with sneezing or shouting. Depending on the side—left or right—referred pain to the left or right shoulder blade can be present. Called pleuritis, this condition can be very sharp and incapacitating, typically with deep breathing, coughing, or sneezing. Suppressing the depth of respirations to avoid this type of pain can make one prone to pneumonia. Treatment of this condition is with NSAIDs.

Pleurisy is a form of pleuritis that is usually caused by a lung infection, such as viral or bacterial pneumonia. It can create referred pain in the RUQ.

Diaphragmatic abscess: This is usually a serious infection from another infectious process in the bowel, liver, or gall bladder. Treatment of this condition is done via IV antibiotics for the abscess and its primary cause or by surgery to drain said abscess.

Pancreatitis: The pancreas makes digestive juices that are secreted into the duodenum. Therefore, any disruption can be very painful, just as how gallstones can affect the gall bladder. The pain from this condition is above the stomach and usually radiates toward the back, but when near the “head,” this pain is present in the RUQ. Pancreatic abscesses, cysts, or generalized pancreatitis from alcoholism can cause severe pain when digestive juices are stimulated; such pain usually becomes worse after eating. Untreated, pancreatitis can lead to pseudocyst, bile duct or duodenal obstruction, or even fluid in the abdomen, which is known as ascites.

Pancreatic cancer: This form of cancer often has no symptoms when it begins in the left side of the abdomen (LUQ), but when it extends toward the right side in the direction of the “head” of the pancreas, it can obstruct ducts that empty into the duodenum, causing significant pain. It is rare that a pancreatic cancer is caught early unless it originates in an area near the “head” of the pancreas.

It is noteworthy that pancreatic pain, although logically assigned to the RUQ and LUQ, typically causes mid-epigastric pain that can radiate to the back.

Except for the skin, the liver is the largest organ in the body. It is a detoxification organ and also helps with the breakdown and recycling of hemoglobin from old red blood cells. It produces bile for digestion that is concentrated in the gall bladder and then secreted into the duodenum of the small bowel for the breakdown of food.

Inflammation in the liver is generically called hepatitis, but hepatitis is usually a word used to refer to specific viral illnesses, such as Hepatitis A, B,” C,” and so on. The most common disease of the liver, cirrhosis—from either alcoholism or infection—is not very symptomatic except for the metabolic side effect of muscle cramps. However, hepatitis is painful, causing sever RUQ pain that radiates to the right shoulder blade. Bedsides infection, obstruction from tumors can also cause liver pain. Also, cardiovascular problems can lead to liver swelling, which can cause severe pain because its capsule is so sensitive to distension.

Treatment of liver disease is related to the cause, such as withdrawing alcohol, treating the hepatitis with antivirals, or cancer therapy.

Because the gall bladder sits in a snug pocket at the inferior edge of the liver, its inflammation can be hard to distinguish from liver disease. However, a good history will point the way, associating symptoms with meals and gas. Like the liver, its pain in the RUQ is under the rib cage and can cause referred pain to the right shoulder blade.

The original Hippocratic oath forbad the removal of gallstones. How times have changed! Stones in the gall bladder can be too large to travel through the bile duct and can get stuck anywhere between the gall bladder and the duodenum. Obstructed ducts collect backup fluid, and as is usual with any standing fluid in the body, become infected.

Typically, gallstones, when symptomatic, are considered the same as cholecystitis, which is the gall bladder term for infection. Treatment is typically done via surgery.

The right kidney can get infected (pyelonephritis) or become obstructed by a stone (nephrolithiasis). Pain in the right kidney can be extremely painful with even just a tap on the back over the kidney; this is equally true with the left kidney as well.

This is inflammation of the kidney that is caused by infection. Infection is accompanied by high fevers and can quickly cause life-threatening sepsis and subsequent scarring with kidney failure. More ominous and dangerous than a mere bladder infection, pyelonephritis is a medical emergency that is treated with strong intravenous antibiotics.

A blockage, usually because of a stone, can cause urine to back up into the kidney. Stones are addressed via removal by small, endoscopic retrieval; lithotripsy (pulverization with sound); or if necessary, surgery. Hydration is encouraged to “flood the stone” down the line where it can be urinated out. Thereafter, a dietary assessment may be indicated, based on the type of stone that was formed via the crystallization of a particular solute, such as calcium, oxalate, or citrate.

Rarely is the large bowel a cause of RUQ pain. Diverticulosis in the RUQ, a weakness in the bowel wall causing a sac-like protrusion (diverticulum), can cause infection (diverticulitis) and pain that usually radiates down toward the RLQ. However, it is the LLQ that most often experiences pain from diverticulitis. If hard fecal pieces (fecaliths) cause blockage, the diverticulum can rupture. Usually, diverticulitis can be treated medically via antibiotics and an improved diet, although 15% of cases warrant the surgical removal of the diseased segment.

Treatment with antibiotics can be with ciprofloxacin and metronidazole (Flagyl), trimethoprim-sulfamethoxazole (Bactrim), or amoxicillin/clavulanate (Augmentin).

Infections of the abdomen and cancer can cause obstructions in the small bowel, although this is unusual in the RUQ. With pregnancy, however, a lower intestinal obstruction may be pushed upward, confusing the diagnostic picture.

Adhesions are abnormal connections between abdominal tissues and the abdominal wall or even organs. The abdomen is very vigilant with infection and inflammation, stimulating bowel fat to migrate toward an afflicted area to wall it off from the rest of the body. Adhesions can happen with a gall bladder infection that ultimately resolves, but when it heals, it can unfortunately cause the bowel and gall bladder to stick together, creating a kink in the bowel that can make passage of bowel contents difficult. This can distend the bowel to create a colicky, sharp pain. Usually fleeting, this condition can occasionally cause an obstruction that becomes a surgical emergency. Partial obstructions are treated with a liquid diet so as to not challenge the area. Adhesions are not exclusive to the RUQ, as they can occur anywhere in the abdomen.

And, so completes the circular tour around the abdomen. It easily lends itself to subcategorizing with the presence of the epigastric (the upper abdomen) and pelvic (LLQ and RLQ) regions. This series of articles painted the presentation of the acute abdomen with a broad brush to encompass these other areas. It pays to be armed with the knowledge presented here, but one must also think outside this region with imagination and intuition

Topical Antifungals - War of the Worlds

Health & Wellness
What does fungi and fungus mean and what are they? Fungi (plural of fungus), together with bacteria, break down the Earth’s organic matter and release carbon, oxygen, nitrogen, and phosphorus into the soil and airi. With the fungi (over 99,000 species strong) being such a player in our planet’s ecology, it is not surprising that they are everywhere in our human lives, from our shower curtains to under our sinks. Fungi like dark, moist areas, so if they’re everywhere—which they are—then they’re certainly between your toes, in your genital area, under your breasts, and—except for plumbers—even between the cheeks of our rear ends. Obesity increases risk of infection Obesity raises your risk, due to an increase in the overlap of skin folds, which can break down with irritation, called intertrigoii. What are the most common fungal infections? Most of the fungal infections on people are yeasts, like Candida or Malassezia furfur, or der ...
Explore

Health & Wellness
It has long been established that female sexual desire, like that of the male, declines with age. But it’s not the oldies alone who display a lack in libido; many younger men and women are identified with a decline in sexual interest as well. While female sexual disorders are as prevalent, there is somewhat limited understanding of their nature, classification, and pathophysiology. Not surprisingly, there are even fewer treatment options for women’s sexual woes. The advent of Viagra for erectile dysfunction in men was life changing, which begs the question of whether the revolutionary drug’s benefit can be extended to women. But, is it safe for a woman to take Viagra? The short answer is: no one knows for sure. Viagra use in women has not been properly studied, so much so that the FDA has not granted approval for using Viagra on female patients. It is unlikely that your doctor will prescribe the medication, though there are some medical profe ...
Community Articles