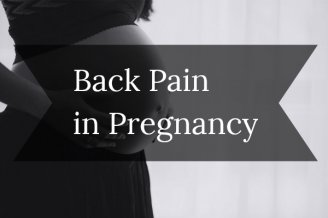 There is back pain, and then there is pregnancy back pain.
Back pain due to pregnancy is the result of an ever-changing center of gravity as the baby grows, as well as the extra weight that one suddenly accrues.

What makes pregnancy so special when it comes to back pain?

Back pain during pregnancy can be due to the changes brought about by pregnancy, be a result independent of pregnancy, or be non-pregnancy back pain piled atop pregnancy-related back pain.
The changes brought about by pregnancy is inherently self-limiting, usually resolving as delivery occurs. The non-pregnancy related back pain is likely to have worsened with pregnancy, as there is more destruction of the intervertebral discs, further loosening of ligaments due to hormones, and more strain on muscles as the pregnancy changes. Force across some joints can double, but when a woman requires treatment for back pain, regardless of the cause, the presence of a fetus inherently limits the choices.

Back pain due to pregnancy

Pregnancy creates many changes in the musculoskeletal system, including the following:

As the baby grows, the center of gravity begins to descend, putting more burden on the lumbar vertebrae. This sudden increase in weight challenges the function of the lumbar parts—the discs, ligaments, and collagen—and may cause failure of any of these, resulting in back pain.
Also, as the uterus grows, ligaments begin to stretch and irritate their points of attachment. One such pair of ligaments are the uterosacral ligaments, which can radiate pain to the lower back and vagina. There are nerves within the ligament that are irritated when the ligaments stretch.
There is a separation of the pubic bones at the front of the pelvis above the bladder called the symphysis pubis, which is also where the pubic bones are connected by ligament tissue. Progesterone hormone, in preparation for the baby exiting through the pelvis at birth, causes this ligament to relax, allowing the bones to separate. The net result is a wider pelvic ring for passage of the baby. Besides pinpoint pain at the front of the pelvis, these developments can cause considerable squawking of the sacroiliac joints in the back of the pelvis, giving the woman lower back pain on either the left or right side.

Back pain unrelated to pregnancy

Pregnant patients of course can experience back pain unrelated to their pregnancy. Indeed, a syndrome prior to conception can and usually does continue during gestation. It may become worse due to the extra weight or relaxation of ligaments or even improve due to the anti-inflammatory properties of progesterone. Also, any injury that causes back damage outside of pregnancy can cause it during pregnancy as well. Regardless, the timing of the onset is of academic interest only because the most pressing matter is that medication choices become limited during pregnancy. The developing fetus can only be exposed to certain substances, and the protocols physical therapists follow for back injury and back pain have to be adjusted accordingly.
Below is the drug classification scheme as it pertains to known risks of the fetus. Classes A and B list drugs most obstetricians use without concern. Even C is used if the benefit outweighs the risk. Class D drugs can have frightening results, and X is out of the question. It is important to note that the same classification does not necessarily carry over to breastfeeding, which requires separate consideration.

The drug classification used in pregnancy

Class A: This is the safest class. There are no known risks.

Class B: There is no apparent risk in humans and the studies are limited, although there haven’t been any animal studies that demonstrated fetal harm.

Class C: Studies have shown adverse fetal effects in animals, but there are no definitive studies that displayed g the same results with humans. This class warrants weighing the risks versus the benefits.

Class D: Studies have shown that there is evidence of human risk. However, potential benefits may warrant its use. This is not said casually. Preventing suicide with an antidepressant, for instance, may be a reasonable trade-off.

Class X: As one might expect from the letter selection, this category is forbidden. Thalidomide, the famous and notorious drug that created a generation of babies with altered limbs, is on this list. This is also the case with acne medication isotretinoin (Accutane), statins, blood thinners, and antimetabolite drugs such as methotrexate (which is used in rheumatoid arthritis).

What medicines are acceptable for use for back pain during pregnancy?

Methocarbamol (Robaxin), orphenadrine (Norflex), and tizanidine (Zanaflex) are Class C drugs, increasing the concern if one of them is needed.

In women who are pregnant and have chronic back pain, the hierarchy of drug choices, described in previous articles for back pain, requires obstetrical input
RECENTLY ADDED