Can You Take Tylenol with Eliquis®?

Can You Take Tylenol with Eliquis®? 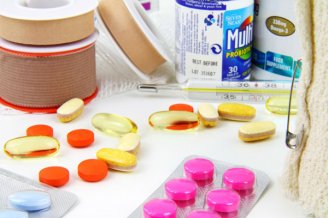 Apixaban (Eliquis) is a factor Xa antagonist or an anticoagulant indicated for reducing the risk of stroke and embolism in patients with nonvalvular atrial fibrillation. There is currently no generic alternative available for Eliquis. There are many prescription and OTC drugs that may interact with apixaban and nonsteroidal anti-inflammatory drugs (NSAID), which is composed of popular pain relievers, are one of them.
NSAIDs, such as Advil, Motrin, and Aleve, are contraindicated with blood thinners (anticoagulants and antiplatelets) because they may increase the risk of bleeding. NSAIDs are also associated with greater risk for cardiovascular thrombotic events, like heart attack and stroke, thus it may predispose the patient to possibly fatal conditions that Eliquis is trying to prevent. If you have a headache, muscle or joint pains, take acetaminophen instead.

Concomitant use of Tylenol and Eliquis

It is safe to take generic Tylenol while taking Eliquis. Tylenol contains acetaminophen (paracetamol), an active ingredient in hundreds of OTC and prescription medications used to relieve pain and fever. The brand name is owned by a subsidiary of Johnson & Johnson, McNeil Consumer Healthcare. Compared with aspirin, acetaminophen does not prevent blood from clotting, so it can be used by patients who are taking blood thinners. In contrast to NSAIDs, there are fewer gastrointestinal effects associated with paracetamol, and it is generally safe for pediatric patients. Apixaban is often prescribed to prevent clots in the lungs or legs. When a patient requires painkillers, they often self-medicate with common over the counter drugs such as aspirin or ibuprofen. This could be dangerous, as NSAIDs may cause serious internal bleeding when taken with blood thinners such as warfarin, Eliquis, Pradaxa, and Xarelto. Patients must be informed about the dangers of using OTC pain relievers while on Eliquis. If Tylenol or paracetamol does not work for you, ask your doctor for alternative medications that can be taken together with Eliquis.
From a worldwide EINSTEIN study, Xarelto and warfarin were compared among 8,000 patients to determine which drug was more effective for preventing clots in the legs and lungs. The group also looked at whether concomitant use of NSAIDs with these drugs might increase the risk for bleeding. According to the study, the risk for a major bleeding episode for patients taking a blood thinner and aspirin was nearly double than those patients not on aspirin. The risk was triple when taking another form of NSAID while on a blood thinner.

How does Eliquis anticoagulant works?

Apixaban is an oral anticoagulant belonging to a class of drugs called Factor Xa inhibitors. This medication prevents certain enzymes in the blood, such as factor Xa, from forming a blood clot. Eliquis is a direct Factor Xa inhibitor; it selectively binds to the active site of activated factor X (Xa) to block the interaction with its substrate, ultimately inhibiting the final stage of thrombin (clot) generation. This type of anticoagulants inhibits both free factor Xa in solution and within a clot, but they do not have direct effect on platelet accumulation. Common Xa inhibitors like Rivaroxaban, Apixaban, and Edoxaban are rapidly absorbed in the body, reaching a maximum concentration within three hours, more or less. Compared with Rivaroxaban, Apixaban and Edoxaban can be administered with or without food, as their exposure and peak concentrations are not affected by a fed state. Factor Xa inhibitors demonstrate linear, predictable therapeutic effects, thereby avoiding the need for routine monitoring, which is a requirement for vitamin K antagonist (warfarin) therapy.

* can be used without initial treatment with parenteral anticoagulant
** can be used in patients with elevated cardiac biomarkers and no previous stroke or TIA episodes, and coadminstered with aspirin or aspirin + clopidogrel or ticlopidine.

Vaginitis: What else if not yeast?

Health & Wellness
Vaginitis, inflammation of and around (vulvovaginitis) the vagina is no beauty contest. There are no winners. But there is a hierarchy of prevalence, however. The numbers 1, 2, and 3 causes of vaginitis, in that order are: Bacterial vaginosis, a bacterial change in the normal vaginal flora that results in irritating breakdown products of the vagina’s natural sugars. Yeast vaginitis, a fungus—usually Candida. Trichomonas, a sexually transmitted disease (STD) that can present with symptoms in both a woman and her partner. These make up 90% of vaginal irritations, resulting in inflammation, itching, redness, pain, sexual discomfort, and painful urination. The other 10%? They are less common, but not rare: Chemical vaginitis By this is meant chemicals that are harsh irritants to the vagina. Antifungal creams and suppositories can be too harsh for the delicate vaginal tissue. Vaginal tissue doesn’t have a number of layers of dead cells to buffer them like y ...
Explore

Health & Wellness
Viagra (sildenafil) and other similar products (Levitra and Cialis) are in the class of drugs known as phosphodiesterase type-5 (PDE5) inhibitors. When sildenafil failed to qualify as a product in the antihypertensive market, penile erection, one of its side effects, was used as an opportunity to market it as something that was never before offered, for a condition never medicinally treated before. Suddenly, impotence became a dysfunction called erectile dysfunction and dysfunction meant a medical abnormality that warranted treatment. The biochemistry Nitric oxide (NO) widens blood vessels, thereby increasing circulation, and also inhibits the breakdown of a cyclic guanosine monophosphate (CGM), which controls nitric oxide’s role in vasodilation, by phosphodiesterase. By inhibiting the breakdown of the controlling CGM phosphate, the nitric oxide can continue to vasodilate.  Viagra, a PDE5 inhibitor, took the market by storm when it was first made available. Beca ...
Community Articles