Comparing Viagra with Levitra, what is your best choice?

Your Options To Treat Erectile Dysfunction Extend Beyond Viagra

When sildenafil began marketing in 1998, the drug company Pfizer sold half a billion dollars’ worth of its brand name, Viagra, in its first quarter. It was luck when the drug failed its study as an antihypertensive, but its male participants began reporting all of the erections they were experiencing.

Now there was a drug which took the closeted “impotence” out into the open, made it a “dysfunction,” and offered a treatment for it. Because it did not cure erectile dysfunction (ED) and required continued use, for Pfizer it was the gift that kept on giving.

Today, there other colors the “little blue pill” has to compete with—orange: tadalafil (Cialis); and yellow: vardenafil (Levitra).

Cialis is dubbed “the weekend pill” because it can last up to 36 hours; the two that are the most alike, however, are Levitra and Viagra. Cialis falls out of the comparison for one very important reason: once it’s taken, a man is stuck with it for almost ten times as long. This may make for a great weekend, but it is not good if he were to need medical attention for heart-related complaints like chest pain. Drugs that treat a cardiovascular emergency may have to be withheld for more than a day. Therefore, if a man has a cardiovascular illness history, he is safer taking something with a short half-life. (A half-life is how long it takes for half of the medication to clear his system.)1

Choosing between the short-acting ED pills—Levitra and Viagra

What do they have in common?

Both of these work by being PDE-5 inhibitors. PDE-5 inhibitors interfere with the metabolism of nitric oxide, which then can function longer to keep blood vessels open for continued blood flow. This results in having and maintaining erections. Therefore, both Levitra and Viagra, having the same mechanism of action, are going to have similar results and similar side effects.

There are, however, subtle differences. The American College of Physicians recommends, therefore, that the choice be based on a patient’s preferences regarding costs, duration, and the subtle side effects.2 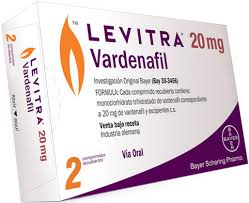 Is there any difference about taking them?

Both should be taken on an empty stomach. Fat and alcohol delay absorption. This is unfortunate since meals and alcohol have been a traditional part of romantic encounters in couples. Both should not be taken more than every 24 hours. Both should not be taken with other nitrates for hypertension. Both can cause visual changes, but Viagra has a cross-reactivity of PDE-5 with the retina’s PDE-6, creating an alteration in color perception, toward the blue (“blue vision”). Unilateral hearing loss is rare but reported in both.

How most people choose between them?

The choice between the two is usually tempered with a bit of stubbornness and brand loyalty. People tend to stick with something that works for them fine. (“If it’s not broke, don’t fix it.”) The cost can certainly become a significant aspect in one’s choice, but the fact that Levitra tends to work after a Viagra failure and is slightly more expensive may even the score in sales.

Nevertheless, it is a truism that any drug can do anything to anyone. Therefore, how one man reacts to one may be very different from how he reacts to the other, just as two men may have different reactions with the same choice. Also, as time goes by, the man changes but the pill stays the same. What may be the right pill for him now may not be so six months later; alternately, what may be the wrong pill for him now may work fine in six months.

My best tips to help you choose

All of this leads to the prudent advice that men should try each of these to see which one of them agrees with him more or gives the best results. More than likely, though, men will not be faced with anxiety, agonizing over which one to choose. If there’s going to be a choice, it most likely will be a choice based on their health—whether to take PDE-5 inhibitors at all…or not. Such a decision is best determined by a physician’s thorough examination and a clear and informative consultation of risks vs. benefit individualized for the patient and his medical condition.

Pharmacy Checker vs.Big Pharma: The Antitrust Suit You Need to Know About

Health & Wellness
Did you know that brand name medications can cost up to 90% less from legitimate Canadian pharmacies and foreign pharmacies than from a US pharmacy?   The universal need for safe, accessible, low-cost medication is at the center of online pharmacy directory Pharmacy Checker’s recent lawsuit against the National Association of Boards of Pharmacy (NABP), Alliance for Safe Online Pharmacies (ASOP), Center for Safe Internet Pharmacies Ltd. (CSIP), LegitScript LLC, and Partnership for Safe Medicines, Inc. (PSM). A ruling in favor of Pharmacy Checker would champion the human right to affordable medication and push to the forefront the issue of inappropriate shadow regulation. It would help websites like You Drugstore continue to do what we do. Is Pharmacy Checker Legitimate? Pharmacy Checker evaluates and accredits online pharmacies that sell brand name medications at low prices. It provides a legitimate online pharmacy list and information on safely impo ...
RELATED ARTICLES

Health & Wellness
Contraindications and Cautions with Liver and Kidney Disease (Drugs Are Detoxified) Drug-drug interactions can occur by adding a drug that interferes with either the normal detoxification actions of the liver or with clearance via the kidney. However, the liver and kidneys should also figure into concerns for single drugs when either of them is compromised. Drug-drug interactions occur in healthy patients because of clashes between different drugs, and single drug toxicity occurs in patients who are not healthy because of liver and/or kidney disease. Drugs are cleared from the body by the enzymes of the liver changing them into substances that can be excreted by the kidneys via urine. The kidneys, besides partnering with the liver in this mission, can also primarily clear certain drugs on their own. The liver, to a lesser extent that the kidneys, can even clear some drugs on its own through excretion into bile that essentially transports these drugs into fecal matter ...
Explore