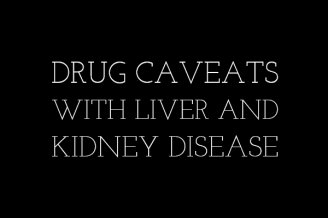 Contraindications and Cautions with Liver and Kidney Disease (Drugs Are Detoxified)

Drug-drug interactions can occur by adding a drug that interferes with either the normal detoxification actions of the liver or with clearance via the kidney. However, the liver and kidneys should also figure into concerns for single drugs when either of them is compromised.

Drug-drug interactions occur in healthy patients because of clashes between different drugs, and single drug toxicity occurs in patients who are not healthy because of liver and/or kidney disease.

Drugs are cleared from the body by the enzymes of the liver changing them into substances that can be excreted by the kidneys via urine. The kidneys, besides partnering with the liver in this mission, can also primarily clear certain drugs on their own. The liver, to a lesser extent that the kidneys, can even clear some drugs on its own through excretion into bile that essentially transports these drugs into fecal matter, which of course eventually leaves the body. Therefore, problems with the liver and/or kidneys can be a challenge for physicians that are trying to treat an illness with medication. It becomes a delicate balancing act of managing drug toxicity with drug effectiveness.

What can cause impairment of liver function?

The National Institute of Diabetes and Digestive and Kidney Diseases established the LiverTox website in collaboration with the National Library of Medicine to search for drugs and dietary supplements that can be toxic to the liver.

Because we cannot avoid every medication that has done anything to anyone at any time, lest we forbid all medicines altogether, the site also has a likelihood scale that can be used to label a drug’s likely risk of causing liver damage. The risks are listed from Category A, which are drugs that are known to cause liver injury, to Category E, which are drugs in which there is no evidence of them causing liver injury. Unknown medications are simply put into Category X until they more clearly understood.

What can cause impairment of kidney function?

Chronic kidney disease is when acute or diagnosed kidney disease continues for longer than three months. Things that can cause it include the following:

How is liver or kidney failure taken into account when selecting a particular medication?

A drug’s clearance property should be a primary consideration when prescribing a medicine. Certainly, if there are effective drugs that are only cleared by the kidneys, they can potentially cause liver failure. The opposite is true, as well. However, there is often the chance of a drug able to cause both liver and kidney disease and failure. Does this make using these medications prohibitively dangerous? Thankfully, the answer is no.

The administration of these drugs, however, must be carefully adjusted to take into account the potential for organ failure. This is the crucial thing. In the kidney, the ability to excrete drugs depends on urine flow, blood flow through the kidneys, and the condition of the kidney tissue. In the liver, its ability to prepare drugs for excretion via the kidneys or clear drugs on its own depends on liver function. In both cases, the solubility of drugs in water is a factor to take into account. Consider this:

It goes in, it must come out

Health & Wellness
For many people, video games represent one of the few ways that you can take your mind off of everyday stress in today's world. It is unquestionable why they have become part of our culture: they are convenient, engaging, cathartic, often relaxing, and fun. Whether you are focused on making your way through an intricate maze, or laughing with some friends as you camp an enemy's spawn, gaming represents an increasingly popular leisurely activity. In fact, gaming has become more than just a pastime, it has evolved into a career choice for many people. However, as we spend more and more time indoors, on the couch, or in our computer chairs, the related increase in health issues is hard not to spot. An Increase in Obesity You have undoubtedly heard by now that obesity has become an epidemic of astronomical proportions in recent years, and that it is only getting worse. Could this have something to do with us spending more time indoors, on said couch, or in said computer chairs? What we ...
Explore

Arthritis: What are the most common forms of arthritis?

Health & Wellness
Inflammation and pain in the joints, or arthritis, can be caused by many things. The CDC estimates about 23% of all adults have been diagnosed with some form of it. In fact, 12% of people in the USA suffer with arthritis chronically. According to the Arthritis Foundation, there are over a hundred different forms of arthritis and related diseases. Psoriasis, bacterial infections (e.g., gonorrhea), viral infections (e.g., hepatitis B, Chikungunya), lupus, scleroderma, Lyme disease, bursitis, fibromyalgia, and gout can all cause arthritis, making diagnosis challenging. Arthritis has a severe economic impact due to lost employment days and lost wages and a psychological impact due to its negative influence on quality of life. Untreated, it can only get worse, resulting in permanent joint damage and a lifelong ordeal of suffering. What are the most common forms of arthritis? The top two types of arthritis, comprising 90% of all arthritis diagnoses, are osteoarthritis, which ...
Community Articles