Eliquis vs Xarelto Warfarin Pradaxa Coumadin and Aspirin - Which Is Better?

Eliquis vs Xarelto Warfarin Pradaxa Coumadin and Aspirin - Which Is Better? 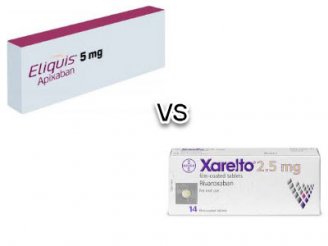 “Blood thinner” is a misleading term. What is implied is that it dilutes the thickness of the blood, such that very thick accumulations (clots) won’t happen. In reality, blood thinners alter the body’s clotting mechanism at the cellular level. To make a clot, there is a cascade of changes—a falling of dominoes. What blood thinners do is interfere with that cascade—pick up one domino so that the sequential falls are stopped at that blank spot.

Clotting is the body’s way of self-sealing. Because it is also involved in repair of damaged tissue, initiating of healing, and an integral part of the entire inflammatory process, it is not like Silly Putty or self-sealing antifreeze.

Clotting is tricky: too much and blood won’t flow (as in a blood clot in a vein); too little and blood flows too much, flooding tissues destructively (as in a stroke) or hemorrhaging to death from minor trauma. For this reason, clotting has been an evolutionary challenge. Mammals have risen to the challenge, however, in making a sequence—from beginning to end—with a number of checks and balances. The clotting “cascade,” as it is called, is very complex and all of the steps are needed for successful stopping of blood flow with injury. Additionally, the clotting system overlaps with the immune system to trap organisms.

It all starts with injury and platelets

If tissue is injured enough to bleed, this means blood vessels in that tissue have been damaged enough to begin leaking blood. The internal lining of the blood vessels, exposed to the external world, signal blood cells called platelets to clump together to seal the leak. While one may be tempted to say, “Aha! It really is like self-sealing antifreeze,” what follows is anything but a plug. The initial platelet response is called primary hemostasis. (“Hemo” = blood; “stasis” = stop.) It is the finger in the dike until the right material can be applied for a permanent fix. Besides clumping together, the activated platelets in primary hemostasis also release their contents into the bloodstream to call more platelets to the site.

What follows is the secondary hemostasis, the final seal important in healing.

It all ends with fibrin

Vigilant coagulation factors are proteins and enzymes, generally, and are inactive unless something calls them to activate. The initial primary hemostasis is just such a provocation. Numerous coagulation factors begin to engage the activation of circulating inactive factors, and after a complicated multiple-pathway string of biochemical reactions, prothrombin begets thrombin, which amplifies the whole process to finally result in fibrin strands that are laid down into what will become a scab externally or a clot (thrombus) internally.

Of all the factors, all of them important, the most significant is thrombin, which amplifies the whole process as well as promotes the “stickiness” of platelets.

Because warfarin may be working fine, ditching it may violate the rule that says, “If it ain’t broke, don’t fix it.”

Warfarin will not dissolve a clot already in place. In fact, the others (below) are considered preventative when there has been shown to be a clot already or if there is a medical or surgical condition that would make a patient prone to flipping blood clots through the body, such as atrial fib. To dissolve clots already there, medications called thrombolytics are used, but this is such a tricky maneuver that the benefit (saving life) must far outweigh the risk (ending life!).1

To summarize, the older blood thinner, warfarin (Coumadin), opposes Vitamin K which is important in activating the other clotting factors. The newer ones hone in on a clotting factor, usually Xa, to thwart the conversion of prothrombin to thrombin and decrease the effectiveness of platelets to stick together.

How does one choose which blood thinner?

What’s best for one may be worst for another. Choosing the right one may be based on:

There are no studies comparing the blood thinners head-to-head.4 None completed yet, anyway. In an ongoing study called “Aristotle,”5 Eliquis was leading in efficacy and safety over the others, but the advantage may yet be determined to be insignificant and the comparisons to warfarin may have conflicting measuring methods. Other studies are ongoing as well. Until there’s a conclusion of one clearly superior over the other, choice must depend on the financial, convenience, safety, and efficacy concerns.

Health & Wellness
The Right Lower Quadrant The abdomen can be separated into four quadrants: LUQ (left upper quadrant) LLQ (left lower quadrant) RLQ (right lower quadrant) RUQ (right upper quadrant) The right lower quadrant The right lower quadrant (RLQ) contains the following: Right ureter Right ovary Right fallopian tube Appendix Small intestines Ascending large colon Ureter The paired ureters (one in the LLQ and one in the RLQ) drain collected urine from their respective kidneys and travel under the floor of the abdomen to the pelvis, where they drain into the bladder. Drain is not the right word, because they exhibit undulating musculature that “milks” the urine down the line, which is known as peristalsis, and spits urine into the bladder every few moments. Like all structures covered with the lining of the abdomen (peritoneum), this lining is very sensitive to distension, be it from a bubble distending a baby’s colon in ...
Community Articles