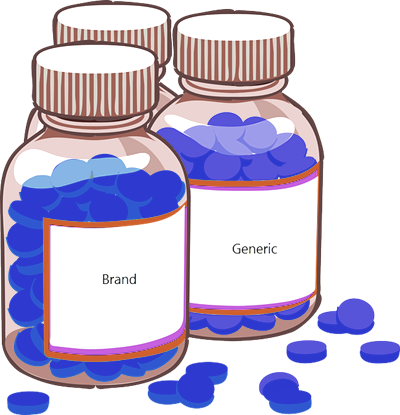 So what’s in a name?

“A rose by any other name would smell as sweet.” 1

How medications are named

Likewise, every medication has different names that refer to the same thing. In pharmaceuticals, the number of names is three:

Generic name: the name given to that molecule that is the active ingredient of any medication.

Trade name: the “brand” name of the medication given by the company who has the patent on the generic. It is usually based on marketing and uniqueness.

No one says, “Hey, while you’re at the drugstore, pick me up a bottle of 2-(4-Isobutylphenyl)propanoic acid, will you?” More likely, it’ll be, “Hey, pick me up some Motrin.”

Our humble servant goes to the store and discovers that Advil may be a little cheaper and reads that it and Motrin both contain ibuprofen in the same dose. So goes an example that compares and contrasts the different ways drugs are named.

Our humble servant, once he realized that Advil and Motrin were both ibuprofen, he didn’t care at all that what he really was buying was 2-(4-Isobutylphenyl)propanoic acid. And he could care less what Pfizer or McNeil—the two manufacturers of Advil and Motrin, respectively—thought about his purchasing decision. But most certainly Pfizer and McNeil cared.

In 1961, Stewart Adams and John Nicholson, researchers at a pharmacy chain in the UK, discovered 2-(4-Isobutylphenyl)propanoic acid. They filed a patent for it in 1963 and one for ibuprofen was granted a few years later.

If the syllables in the chemical name, isobutylphenylpropanoic acid, are cherry-picked and slightly rearranged, the “i,” “bu,” “phen,” and “pro” are reassembled as i-bu-pro-fen.

Its patent expired in 1984, ending the pharmacy group’s monopoly. The prices for ibuprofen dropped and today, one can buy the generic ibuprofen or any of its over 44 trade (brand) names.

Patent expiration is the mother of invention

Patents stimulate innovation, as a new drug can cost a company billions to research, develop, and garner regulatory agencies’ approval like the FDA in the United States. A protected monopoly on the product is the way to mitigate this financial hit and ensure a company is rewarded for its innovation. But there is a limit to this reward, because the same law that allows exclusive profits also allows for the ride to end, allowing others to compete. As a patent’s expiration looms, therefore, drug companies get creative with their old patent. They knock off a molecule here, add one there, and vioila! A new drug, eligible for a new patent. Profits continue, and sometimes an even better drug is available.

Omeprazole, Nexium and Esomeprazole; Are They All The Same?

When generic name omeprazole was patented, its brand name was Prilosec. Because it became one of the world’s best-selling drugs, a year before its patent expired, drug company AstraZeneca adjusted the C17H19nN3O3S molecule, essentially making it the very chemical Prilosec ends up becoming once metabolized in the stomach. Out with the Prilosec, in with the Nexium. Alternatively, out with the omeprazole, in with the esomeprazole.4 AstraZeneca can snicker at the Prilosec knock-offs now that Nexium has its own elite market share.

Until the next patent expiration inspires another molecular card shuffle.

What’s the difference between a prescription drug and an over-the-counter (OTC) drug?

The difference is usually based on the amount of medical surveillance a drug requires. This is common sense caution, and it can be based on either quality or quantity.

By quality, some drugs are dangerous unless expertly administered, such as insulin. One could only imagine if things such as insulin, thyroid hormone, blood pressure medications, etc., were available to anyone who felt confident enough to self-medicate without a medical degree.

On the other hand, by quantity is meant the dosage. Again, using ibuprofen as an example, the 800 and 600 mg. dose is prescription-only, because that much ibuprofen could possibly interfere with one’s clotting abilities; but in its 200 mg (two = 400 mg.) OTC version, the danger is reduced enough to allow people to choose it for minor aches and pains.

The consumed and the consumer: is a rose still a rose?

A rose is not a rose?

Actually, it is still a rose. When a patent expires competing pharmaceutical manufacturers come to the party, generic versions of previous brand (trade) names start pouring out. For ibuprofen, for example, there appeared Wal-Mart’s Equate, Target’s Up and Up ibuprofen, as well as ibuprofen products from RiteAid, CVS, and anyone else wanting to cash in. But the cash was less: pennies on the dollar, compared to what the patented exclusivity earned for the patent-holder. Hence, the generic’s best advantage: affordability.

The consumed and the consumer: when a rose is no longer a rose

To be certified a “generic,” the FDA stipulates that the medication has to have the same active ingredient, that is, the same chemical or generic name. Also, it has to work about the same.

Within a range of 20%. Even when patents end, a company takes great pride in boasting its brand’s consistency of efficacy (efficiency). But out in the trenches, if a generic medication like ibuprofen can take care of a big headache, then the 20% underachieving version of painkiller should be able to handle the small ones and up.

Other differences, such as coating (gel, tablet, etc.) and additives (caffeine, etc.) may make absorption and efficacy slightly different, which can earn a certain brand name some consumer loyalty. These differences are marketed aggressively by the companies who make them.

Headaches are one thing. What about other things, like seizures?

Depakote is a brand name for the generic valproic acid, an anti-seizure medication—or, anticonvulsant. It is a drug that has a therapeutic range, which means it must have a certain concentration in the blood to be effective. This is why blood tests are necessary to make sure a person with epilepsy has enough “on board” to adequately prevent seizures. In cases like this, a 20% difference could matter.

Also, generic drugs are less likely to be homogeneously distributed throughout the pill or tablet. Some manufacturing techniques in generics may push all of the active ingredient to one side, meaning splitting it in half will be an all-or-none proposition, when all someone wanted was half.

Which is better—generic or brand name?

This is probably a question best asked of your physician or other healthcare professional. Does the typical patient really want to research the therapeutic range of blood concentration, the bell curve of efficacy in treating a problem, or how additives or coatings could impact a drug’s success or absorption? Unlikely.

Some argue that if the problem is a little problem, such as a headache, some heartburn, a muscle strain, a runny nose, or dry eyes, the difference between generics and a brand name probably won’t mean a thing. Most likely, using any of the stuff will work. In this case, generics are better, but only because they are cheaper.

Some argue that if the problem is a big one, such as diabetes, hypothyroidism, epilepsy, peptic ulcer disease, Crohn’s disease, or a severe chronic pain syndrome, only trial and error will tell if the generic will cut it. A physician can cut to the chase, however, and tell a patient right out, based on, not marketing and advertising promises, but his or her years of experience and expertise in a subspecialty.

“Ask your doctor if Bestdrugintheworldbecausewesellit is right for you.”

The age of generic drug availability ushered in a time of better affordability, patent expirations allowing dramatic reductions in the price of medications. With exclusivity for the patent holder no longer in effect, competition and the free market allowed drugs, previously prohibitively expensive, to plunge to the lowest bottom line. This often made the difference in whether or not a patient would take his or her medicine. Almost one-fourth of patients do not take their medicine because of cost.5 No doubt, the brand names, with a claim of consistent results and manufacturing excellence, still attract those who want what they consider only the best. For some conditions, this is money well spent; for others, it is simply overpaying.

Does Endometrin Delay Your Period?

Health & Wellness
Progesterone is crucial in women of childbearing age. It is secreted by the ovary after ovulation naturally. The hormone is responsible for the slightly high body temperature during the second half of a female menstrual cycle. The hormone prepares the lining of the uterus in readiness for embryo implantation. If fertilization doesn’t occur, the lining of the uterus (endometrium) breaks down and monthly periods start. If a pregnancy occurs, progesterone is crucial to sustaining the pregnancy. Low progesterone hormone may be a cause of infertility in women. Additionally, women on fertility drugs can experience low levels of progesterone as a result of the medicines used to restore fertility. In such situations, a doctor may prescribe Endometrin. Many women on Endometrin have experienced a monthly period delay. Does Endometrin delays period, or other factors are to be blamed? Before answering the question, what is Endometrin and how does it work.    What is Endometr ...
Community Articles