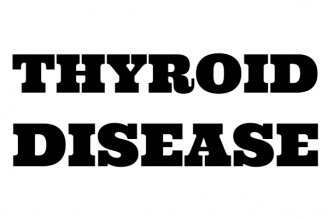 The thyroid gland is part of the endocrine (gland) system in the body. The endocrine system is useful for doing things like making adrenalin, insulin, hormones, and many other important secretions. The thyroid gland makes thyroid hormones, and four pockets of parathyroid glands within it make parathormone (parathyroid hormone), which affects the balance of calcium for our bones. Removing the entire thyroid gland will also remove the parathyroid glands, a surgical caveat that became apparent as soon as thyroid surgery was developed.
The thyroid itself is a butterfly-shaped gland that covers the trachea (windpipe) below the Adam’s apple. Its main hormone, thyroxine (T4), breaks down into tri-iodothyronine (T3), which controls the body’s rate of metabolism, growth, and body temperature. The thyroid relies on iodine to make its hormones, and those without seafood in the diet require other sources of iodine, such as iodized salt, cranberries, strawberries, cheese, potatoes, or navy beans.

Hypothyroidism is the condition in which the thyroid is not making enough thyroxine (T4). This can be seen in other types of thyroid conditions (see below), but generally a person with hypothyroidism will demonstrate a generalized slowing of his or her metabolism over time. Patients will often demonstrate the following conditions:

Hyperthyroidism is an overactive thyroid gland. Generally-speaking, the metabolism in is augmented in this condition. Typically, patients with it will demonstrate the following:

How are disorders of the thyroid gland treated?

Treatment depends on which type of functioning has gone astray. Whether increasing or decreasing thyroid function is necessary to correct a disorder of the thyroid gland, the main goal is reaching what is called a euthyroid state, which, as mentioned above, means the thyroid is functioning normally.

Thyroid hormone (thyroxine, or T4) has been synthesized as levothyroxine (Synthroid). The TSH levels are elevated because TSH is trying to compensate for low thyroid activity by stimulating T4 production. Therefore, treatment success can be monitored by the TSH returning to normal levels, as well as reduction in any goiter and reduction of hypothyroid symptoms.

Hyperthyroidism, the opposite of hypothyroidism, prompts the pituitary gland to rectify the situation by decreasing its amount of the thyroid stimulating hormone. Because T3 and T4 are the thyroid hormones, both or either can be elevated with hyperthyroidism. The treatment approach is the following:

These have side effects, so a treatment protocol can be adjusted in accordance with patient comfort and safety. Radioactive iodine, one of the antithyroid drugs, is contraindicated in pregnancy.

It’s hard to believe that an ounce of tissue can be so important, but like most of the body’s parts, it will be missed if it ceases to function properly. Hypo- and hyper-functioning of the thyroid are deviations from how the thyroid normally works and results in hypothyroidism and hyperthyroidism, respectively. The goal of treatment is to manipulate the dysfunction back into a euthyroid state.

8 Sure Ways to Beat Your Allergies

Health & Wellness
Almost a quarter of all Americans suffer from Allergies, while more than half of all Americans test positive to at least one allergen. Yet, despite being well-studied and increasingly more common, allergies continue to wreak havoc. Many people rely on both prescription and non-prescription medications to mediate their symptoms, but they are often not enough. That being said, here are 8 sure ways to beat your allergies. 1. Make Your Home Allergy-Proof Even those with outdoor allergies may find themselves feeling only mildly better after taking shelter in their homes. If you are one of these people, it may be because allergens are finding their way inside. Allergy-proofing your home can be an effective way of stopping those pesky allergies and making your life more comfortable. Do you use fans to cool your home? Fans tend to draw air in from the outside, dragging those annoying outdoor allergens in with it. Try using an air conditioner instead. This way, you can keep cool while keeping ...
Explore

Health & Wellness
As the summer weather settles in, many people take to the outdoors to exercise and be more active. For some, this increase in physical activity means more than just sweating, losing weight, and having fun. It means more coughing, more choking, and more wheezing as well. You see, exercise is a trigger for the symptoms of asthma, a chronic inflammatory disease of the lungs. The most common symptoms of asthma include coughing, wheezing, shortness of breath, and chest tightness. Many people with asthma experience a worsening of their symptoms when they exercise, but to understand why, we should look closer at what asthma is and what it does. What is asthma? As mentioned above, asthma is a chronic inflammatory disease of the lungs. More specifically, asthma affects the air passageways of the lungs. If you have asthma, your air passageways become enlarged and inflamed, squeezing and sometimes blocking the flow of air through your lungs. This makes it difficult for you to breathe, especia ...
Community Articles