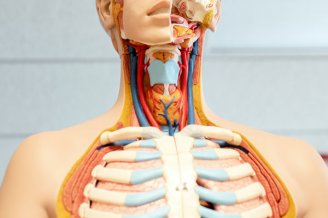 Abnormalities of the thyroid fall into two categories:

A tale of two hormones

Tri-iodothyronine (T3) is the active hormone of the body that controls the rate of metabolism, growth, and body temperature. T3 is broken down from thyroxine (T4), another thyroid hormone.
T4 is made by the thyroid after stimulation from a pituitary hormone known as the thyroid stimulating hormone (TSH). Further up the cascade, there is something that stimulates the pituitary production of TSH from the hypothalamus gland.
The thyroid relies on dietary iodine to make its hormones. Seafood is especially rich in iodine, but other sources include iodized salt, cranberries, strawberries, cheese, potatoes, and navy beans.

The thyroid maintains a consistent metabolism rate via what is called the hypothalamus-pituitary-thyroid axis. For example, if T4 or T3 levels are elevated, TSH levels will go down because the thyroid doesn’t need the pituitary stimulation. If T4 and T3 levels are deficient, TSH levels will rise. All of this is tempered at the hypothalamus, which is responsible for stimulating the pituitary to make TSH.

Euthyroid is as euthyroid does

The two ends of the spectrum away from the normal euthyroid state are hypothyroidism and hyperthyroidism.
In hypothyroidism, the thyroid does not make enough of thyroxine (T4). A hypothyroid state can result in fatigue and lethargy, weight gain, decreased sweating, cold intolerance, constipation, dry skin, brittle nails, thinning or loss of hair, depression, menstrual problems and infertility, high cholesterol, water retention, and heart disease.
In hyperthyroidism, the thyroid makes too much thyroxine (T4), thereby accelerating the metabolism. A hyperthyroid state can result in weight loss, increased sweating, anxiety, insomnia, emotional instability, tremors, palpitations, heat intolerance, increased appetite, menstrual irregularities or absence, and erectile dysfunction. Thyroid storm, the most severe form of thyrotoxicosis, is a life-threatening emergency because of its association with exaggerated cardiac activity.

What drugs are used to treat hypothyroidism?

Since hypothyroidism involves a deficiency in T3 and T4, treatment is based on addressing the cause of it, such as a dietary deficiency in iodine, and then simply replacing what the gland cannot make.
Levothyroxine: Thyroxine, or T4, was first synthesized in 1927. Levothyroxine (Synthroid) is a commonly prescribed medicine with over 20 million prescriptions a year in the USA alone. It is given orally, but it can also be injected in a shot or even via IV. It is taken once a day, usually in the evening on an empty stomach.
There is a generic form available, but it was accompanied by considerable controversy over the bioequivalence between the brand form and the generic form. The FDA, after its 1997 study, declared they were equivalent, but since some feel the study was flawed, it has become customary to monitor T4 and TSH levels when switching from one to the other.
Treatment success can be seen with TSH returning to normal levels and a reduction in any goiter and hypothyroid symptoms.

Hyperthyroidism and its elevated levels thyroid hormones prompt the pituitary gland to rectify the situation by decreasing its amount of thyroid stimulating hormone. Because T3 and T4 are the thyroid hormones, both or either can be elevated in hyperthyroidism. Treatment is based on not only treating the cause (tumor, pregnancy-related, and autoimmune, etc.) but also by doing the following:

How are drugs for thyroid treatment monitored?

The goal is a euthyroid state, which is where the thyroid is functioning normally and levels of the thyroid hormones and TSH are normal. The first hormone to respond to thyroid treatment drugs is the thyroid’s thyroxine (T4) hormone, then the thyroid’s tri-iodothyronine (T3) hormone, and then TSH.

How long is treatment?

Some thyroid conditions are permanent and require life-long therapy. Today’s formulations make this easy. Others may be temporary, although treatment can last years, as is the case with autoimmune thyroid conditions like Hashimoto’s thyroiditis and Graves’ disease. Some conditions, such as nodules, are cured via surgical removal. Some nodules are simply observed or shrink with medication.
Thyroid medication can be used to treat an under-functioning or over-functioning thyroid. The uniqueness of the thyroid gland requires a unique pharmaceutical approach for its treatment.

Health & Wellness
For many people, video games represent one of the few ways that you can take your mind off of everyday stress in today's world. It is unquestionable why they have become part of our culture: they are convenient, engaging, cathartic, often relaxing, and fun. Whether you are focused on making your way through an intricate maze, or laughing with some friends as you camp an enemy's spawn, gaming represents an increasingly popular leisurely activity. In fact, gaming has become more than just a pastime, it has evolved into a career choice for many people. However, as we spend more and more time indoors, on the couch, or in our computer chairs, the related increase in health issues is hard not to spot. An Increase in Obesity You have undoubtedly heard by now that obesity has become an epidemic of astronomical proportions in recent years, and that it is only getting worse. Could this have something to do with us spending more time indoors, on said couch, or in said computer chairs? What we ...
Explore

Health & Wellness
Cialis (tadalafil) is the third prescription drug approved by the US FDA for treating erectile dysfunction (ED) or impotence in men. Clinically, the term impotence is no longer being used and the inability of a man to get and keep an erection firm enough for sexual intercourse is simply referred to as male erectile disorder or erectile dysfunction. In lay usage, impotence has a derogatory connotation and its true meaning often confused many. Impotence is a reproductive system disease in which one is unable to engage in a sexual act due to various reasons, which may include sexual arousal problems, premature ejaculation, inability to gain an erection, or having a weak erection. In this sense, the term can also be applied to women sexual disorders. Cialis, just like Viagra (sildenafil) and Levitra (vardenafil), is a reversible phosphodiesterase 5 inhibitor (PDE5) that enhances erectile response to sexual stimulation by increasing blood flow to the penis. Compared to sild ...
Community Articles