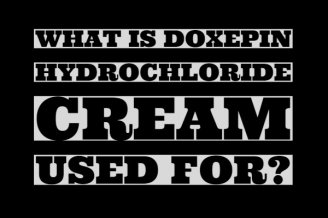 Doxepin hydrochloride cream is a topical medication belonging to the drug class tricyclic antidepressant (TCA). As the name suggests, TCAs are used to treat depression and mood disorders. But the topical cream version of doxepin is used for short-term treatment of pruritus (itch) in skin disorders, including atopic dermatitis or lichen simplex chronicus. The drug is currently under development for the treatment of chronic hives. It has reached phase II clinical trials for this indication in 2017.

Itching or pruritus is the prevailing symptoms in certain chronic skin conditions. In some cases, the itch can be debilitating. Yet the market lacks a universally effective anti-itch medication. The fact that the pathophysiology of itch in most cutaneous disorders is still unclear only serves as a barrier in finding a therapeutic solution for this common medical concern. Pruritus is characterized by an unpleasant and irritating sensation that provokes the desire to scratch. While acute pruritus can be managed in a straightforward way, chronic itching due to systemic diseases is still a challenging predicament for many clinicians.

Doxepin topical is available in a 5% cream preparation; each gram of the cream contains 50mg of doxepin hydrochloride. It is approved by the FDA to relieve moderate itching of the skin in adults caused by atopic dermatitis (eczema) or lichen simplex chronicus. Note that the cream does not treat the cutaneous skin disorders mentioned; it’s just used to relieve itching associated with the disease. Moreover, it is not recommended for long-term use. Topical doxepin is only approved for managing pruritus for not longer than 8 days. The safety and effectiveness of this medication has not been established in patients below 18 years of age.

How doxepin works to relieve pruritus remains unclear. Experts can’t pinpoint the exact way the psychiatric drug relieves itching, but there are several working theories on its mechanism of action. Researchers Eschler and Klein observed that in 19 clinical trials between 1950 and 2009, topical doxepin is the only antihistamine that demonstrated efficacy for treating chronic itching. But, doxepin is not the only antipruritic antidepressant used for itch therapy despite little evidence demonstrating relief of symptom. Other drugs being prescribed by clinicians from this drug class include amitriptyline, imipramine, and clomipramine.

Doxepin HCl has potent histamine blocking actions; it specifically blocks H1 and H2 receptors. By antagonizing these receptors, histamines are unable to attach to the cells in your body to produce symptoms. Depending on where it is released, histamines can cause a variety of symptoms and allergic responses—itching is only one of these reactions. Antihistamines can also produce drowsiness, which can somehow reduce awareness of pruritic symptoms.

In a comparative study on 270 participants with atopic dermatitis, doxepin was able to provide symptom relief in 85% of treated patients. Majority of positive responses occurred during the first 24 hours of treatment. Sixteen patients withdrew from the study because of adverse effects from doxepin. Most commonly reported side effects include stinging or burning sensation and drowsiness. All adverse reactions subsided in severity and frequency over the course of therapy. Another study suggested that the antihistaminic effect of oral and topical doxepin does not differ. This explains the expected occurrence of drowsiness in at least 20% of patients using topical doxepin. However, topical doxepin cream produces minimal adverse reactions compared to orally administered doxepin. This study also found that cream preparation could suppress skin test responses, so treatment must be stopped at least two weeks before hypersensitivity skin testing. Applying topical doxepin beyond eight days can increase systemic exposure and may increase the likelihood of contact sensitization.

In treating pruritus in atopic dermatitis, apply a thin film of doxepin cream four times a day with at least three- to four-hour interval. Because the drug is still absorbed by the body through the skin, it is advisable to stop treatment after eight days. Failing to do so can result to more serious systemic effects. Since the possibility of sedation exists in some patients, they must be cautioned against driving and operating hazardous machinery while using the medication. If you experience excessive drowsiness while on doxepin, reduce the frequency of applications or the amount of cream applied.

Health & Wellness
Trying to get pregnant and not having any luck with it is a matter that requires serious thinking. Usually, people try to seek out any viable possibility to have their own child, and that includes various hormonal therapies. But before you embark into something that can have so individual results you need to know what the success rate is for any of these products. One of these is “Gonal-F”. What is it, how does it work, and what is Gonal-F success rate? What is Gonal-F and How Does It Work? Gonal-F is a infertility treatment product from the gonatropin hormonal family. When you take fertility drugs like “clomiphene”, your body might not respond to it. That is when a gonatropin comes in and its function is to help you ovulate. Gonatropin can also be prescribed if you do not produce enough hormones (called FSH and LH) that are needed for ovulation. Gonatropin is also used when you’re under the procedure such as intrauterine inseminati ...
Explore

Health & Wellness
Tamoxifen is a prescription drug that has been in existence for a number of years. It’s the generic form whereas, Saltamox is the brand name. It can be prescribed to both men and women.   What is the Medicine Used for in Men?   To treat breast cancer   Males are at risk of breast cancer, although they do not have breast like females. They have a small quantity of breast tissue; breast of a man is identical to the breast of a young girl before she gets to puberty. In a girl, the tissue will grow and develop once puberty sets in, but in a man, it does not. There are different types of breast cancer, which affect men, though the cancers which affect the parts that produce as well as store milk are rare.   Males at risk of breast cancer are above 35 years; the chance of developing breast cancer increases with age. Males between 60 to 70 years are more prone to breast cancer. Below are risk factors for breast cancer: Family history  Exposure of ...
Community Articles