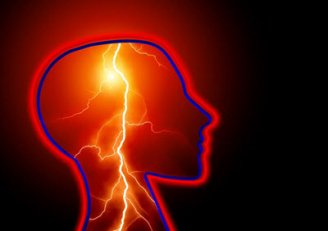 What is epilepsy? What say you, Erasmus?

In his 1818 edition of “Laws of Animal Causation,” Dr. Erasmus Darwin, grandfather of the more famous Charles Darwin, wrote, “The spirit of animation is the immediate cause of the contraction of animal fibres…resides in the brain and nerves, and is liable to general or partial diminution or accumulation.”

But then he states, in “…the various kinds of epilepsy…a pain or disagreeable sensation is produced, frequently by worms, or the acidity in the bowels or by a diseased nerve in the side, or head, or by the pain of a diseased liver.”

Worms and liver pain notwithstanding (remember, this was state-of-the -art medicine in 1818), at least he nailed it with citing a “diseased nerve…in the head.”

Epilepsy is a neurological disease—a brain disorder—that results in a variety of seizure types from a variety of causes. These causes, today, are better identified with the modern imaging studies available and with electroencephalogram (EEG), but regretfully many times the exact cause is unknown. What is known, however, is that a particular area of nerve excitation in the brain begins a cascade that spreads nerve stimulation, like dominoes falling, involving either a particular nerve tract or hemisphere (focal) or progressing to involve the entire brain (generalized) in a self-perpetuating sequence that results in uncoordinated, focal or total-body muscular spasms (“myotonic”).

Additionally, and often important in a diagnosis of epilepsy (especially if the initial seizure wasn’t actually witnessed), is the presence of a coma-like amnesic episode after, called a “postictal” state. Such a state can be the determining diagnostic feature that sets epileptic seizure apart from merely “falling out,” as with hypoglycemia, hyperventilation, or neurotic "spells."

These other things, called “paroxysms,” are nothing like an epileptic seizure, and anyone who’s seen both types knows the difference and how much more serious epilepsy is in contrast.

There can be life-threatening suffocation and death from a seizure, but the most common dangers are from injuries sustained while in convulsions, involving striking the head in falls, breaking a limb or hip, or biting oneself. Injuries to the head confuse the treatment further with the danger of a concussion added to the seizure disorder.

Being in the wrong place at the wrong time? There is never the right time to have a seizure, but a person experiencing a seizure can easily be the wrong place. Driving, operating machinery, near water, or even cooking can all present secondary hazards that can result in catastrophic injury or death. So epilepsy is serious business. Thankfully, today’s medications do a good job in either eliminating seizures or spacing them out into less frequent occurrences.

What are the different types of epilepsy?

There have been many definitions and labeling schemes in the past, but currently the classification by the International League Against Epilepsy (ILAE) is used. The ILAE classifies epilepsy by seizure type:

The ILAE subcategorizes these based on whether they involve muscular (“motor”) convulsions or “non-motor,” as in temporal lobe seizures. An example of a non-motor seizure is when a patient, so diagnosed, “zones out,” drifting off, unfocused, in episodes that can happen several times in a short span of time. These are excitation cascades in what used to be called the “quiet” areas of the brain, typically the temporal lobes, which are involved sensory functions instead of motor (muscular) movements.

The ILAE classification is the culmination of trial and error of many schemes in the past, but this scheme is designed to better identify cause for the sake of better treatment.

How is Epilepsy diagnosed?

With apologies to Erasmus Darwin, don’t look for worms as a first step.

An EEG of brainwaves is the ultimate diagnostic test to make the diagnosis. When this turns out normal, other causes should be sought, such as genetic, anatomical, metabolic, infectious, inflammatory, or from drug abuse. Some examples include

Because there is a great divide in the causes as well as the progression of epilepsy between children and adults, there are entire protocols in diagnosis and treatment that are used based on age.

What are medications used to treat epilepsy and other seizure disorders?

For both focal and generalized seizures:

For primarily focal-onset seizures, including those that then trigger convulsive seizures:

Some of these medications are used with caution, as careless use can worsen epilepsy, but with adequate care by a neurologist, an individualized strategy can be implemented.

How long does treatment last?

Unless the cause is temporary, epilepsy should be considered a life-long illness, the treatment going on indefinitely. This may be a disturbing prospect, but anyone with epilepsy will be the first to report that a lifelong commitment to an anti-seizure drug is not as disturbing as having seizures.

Epilepsy is serious business, and people still die from it—either from the seizure itself or because of having a seizure in the wrong place and (always) at the wrong time. Any episode of involuntary spasms or lapses in attention, especially associated with a postictal state, should be immediately addressed by the appropriate healthcare professional. In fact, if new, it warrants a 9-1-1 call. But those suffering from epilepsy, under the right care, have converted it from an incapacitating disease to a chronic condition, well controlled.

Health & Wellness
Tamoxifen is one of the drugs that improves fertility in women by increasing the number of viable eggs produced from the ovaries. Depending on the tamoxifen dosage that a woman takes, the drug has different effects in aiding fertility. Before taking the drug is it advisable to consult you, gynecologist, because there are various factors that determine the dosage such as age. Older women might need a higher dose to improve fertility. Initially, the drug was used by women going through chemotherapy because of the adverse effects it has on fertility. It was observed apart from preventing and managing breast cancer; the drug increased the number of viable eggs. Who is the right candidate for Tamoxifen? The drug is very specific in the treatment of fertility because it can only treat infertility associated with ovulation problems. It helps in the induction of ovulation, so it is best suited for women who have a problem with ovulation. This is mainly women who have been diag ...
Explore

Are There Chances Of getting Pregnant On Your Period?

Health & Wellness
Failure or misuse of birth control is a primary cause of unplanned pregnancies. Being pregnant attracts different feelings, to some, it is a joy after much waiting. To others it is stressing since the last thing on your mind was to become pregnant. Whichever the case, it is crucial to learn when you can become pregnant to take advantage of the circumstance to attain a pregnancy if that’s your goal; or to avoid the situation if not ready to become pregnant. It is a misconception that a woman can’t become pregnant during her period after having sex. What is a period? For every woman of childbearing age, every month, the lining of the uterus becomes thicker in preparation for pregnancy after an egg is fertilized. If the egg is not fertilized, the lining is shed off as blood via the vagina. The process is known as period or menstruation. But what are chances of getting pregnant on your period? The chances of getting pregnant on your period Chances of becoming pregnant on ...
Community Articles