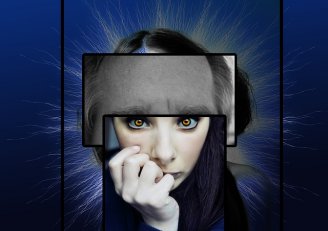 For the sake of explanation, think of the brain as a graphic user interface (GUI), such as a web browser, translating a series of 0s and 1s into projections of sight and sound. It is a matter of assembling information into usable patterns. Likewise, the brain, through its sense organs of sight, smell, taste, hearing, and touch, as well as other senses, puts the electromagnetic waves, and slices of time of the real universe into an order that makes sense. Presented on our “screens” are trees, people, music, noise, hot and cold, pain, intuition, cause and effect, and life in general.

Humans are creatures inundated with pareidolia. This refers to the tendency to see patterns and assign meaning to them. It is seeing an elephant in a cloud, white snakes along lines in a paragraph that separates the words, face profiles in the veins of marble, or the man in the Moon. It has been said that pareidolia is a sort of flaw, but on a grander scale, a similar process is probably what creates for us our universe—it is why wavelengths of 650nm are, to us, red; why a sound with a frequency of its peaks at 1 kHz is unpleasant; and why the many different inputs coming at us are seamlessly incorporated into our navigating the world around us. The anatomy of the brain is such that we all pretty much see the universe the same way.

However, the same cannot be said of schizophrenics, who, in many respects, see a different reality, a different universe even. Their faulty perspective of the world can originate from inside them without any outside influences. (See “Positive symptoms,” below.) If the universe is a biological “construction” of the world interpreted as real, schizophrenics’’ constructions are faulty, making normal functioning impossible. Just as the universe is our own concoction in our own consciousness, the universe of the schizophrenic is just as real and tangible to them. This is why a well-known symptom of schizophrenia is the afflicted hearing voices that are as real as what is heard in actual conversations.

Schizophrenia afflicts 1% of the world’s population and is highly debilitating, and it is ranked by the World Health Organization as one of the top 10 illnesses contributing to the world’s burden of disease.

What are the symptoms of schizophrenia?

How is schizophrenia diagnosed?

The diagnosis of schizophrenia is a matter of categorizing symptoms according to the DSM-5, which what book psychiatric diagnosticians use. The criteria are laid out, but generally speaking, they include positive and negative symptoms, disordered thinking, and dysfunctional interaction within personal or occupational relationships lasting longer than six months. The diagnosis excludes disorders arising from substance abuse.

How is schizophrenia treated?

For the most part, the mechanisms of treating schizophrenia by antipsychotics aren’t completely known. However, the brain’s neurotransitters, which orchestrate and modulate the propagation of signals along organized nerve tissue, are key. This makes sense since no thought, much less a thought disorder, can occur without the role of the neurotransmitters. The following neurotransmitters are manipulated with antipsychotic drugs:

Do we know what causes schizophrenia? Does it make one more prone to other psychiatric disorders?

No, we do not what causes schizophrenia, and yes, it does make one more prone to other psychiatric disorders.

It is possible that it is an interaction or co-morbidity of several mental health diseases that have similar symptoms. It is generally accepted that it is a genetic disorder, can be inherited, and can have a strong presence in family history.

Schizophrenics have higher rates of depression, anxiety, suicide, and substance abuse, but so do people from families with histories of these aberrations in behavior, a fact that adds support for the genetic cause.

Schizophrenics are often inadequately treated due to social avoidance, stigmata, and their own compliance, or lack thereof, with their medications due to delusions. They are abused by omission of common social interaction and courtesies. They suffer immensely. An untreated schizophrenia is an emergency and a tragedy.

Thankfully, although not cures, many medications have been able to lessen symptoms to allow schizophrenics a level of function that can give them a quality of life impossible before. As the explorations of neurotransmitters and their receptor sites continue, better treatment and a better understanding of the disease continue to come closer to the grasps of modern medicine.

The Dark Side of Exercise – When NOT to Exercise

Health & Wellness
There is no question that getting enough physical exercise is crucial for improving and maintaining your health. Do you want to feel better? Do you want to sleep better? Do you want to look better? Ask these questions to almost anyone, including doctors and other health care professionals, and their response will likely include getting enough exercise. There is one question, however, that we do not often ask: is there ever a time when exercising is a bad idea? You may be surprised to learn that yes, exercising is sometimes a horrible idea. Read the following information below to find out more about when you should or should not exercise. When You Are Sick Some people are adamant that exercising through coughs and colds is perfectly fine and that it can even help you get over what ails you. Many doctors agree for the most part, but there are some cold and flu factors that will dissuade almost any health care professional from encouraging you to exercise. Fever is one of those facto ...
Explore

Topical Antifungals - War of the Worlds

Health & Wellness
What does fungi and fungus mean and what are they? Fungi (plural of fungus), together with bacteria, break down the Earth’s organic matter and release carbon, oxygen, nitrogen, and phosphorus into the soil and airi. With the fungi (over 99,000 species strong) being such a player in our planet’s ecology, it is not surprising that they are everywhere in our human lives, from our shower curtains to under our sinks. Fungi like dark, moist areas, so if they’re everywhere—which they are—then they’re certainly between your toes, in your genital area, under your breasts, and—except for plumbers—even between the cheeks of our rear ends. Obesity increases risk of infection Obesity raises your risk, due to an increase in the overlap of skin folds, which can break down with irritation, called intertrigoii. What are the most common fungal infections? Most of the fungal infections on people are yeasts, like Candida or Malassezia furfur, or der ...
Community Articles