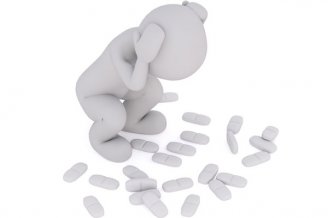 Viagra and Cialis belong to the drug class phosphodiesterase type 5 (PDE5) inhibitor that works for treating erectile dysfunction (ED), or the inability to attain and maintain an erection, in men. The main difference of the two is how long they stay in your system. Cialis (tadalafil) has the longest duration among widely used ED drugs in the market; its effect is said to last up to 36 hours compared to four- to six-hour duration of Viagra (sildenafil). Because Cialis can remain in your system longer, you don’t have to limit your sexual activity within a short timeframe. However, it can be a downside if you are taking other medications that may interact with the drug.

PDE5 inhibitors work by improving blood flow to the penis. Erection is attained when the chambers of the penis called corpora cavernosa are filled with blood. The spongy tissues inside these chambers allows the pooling of blood, which leads to an erection. A person with erectile dysfunction may have certain conditions affecting the nerves or blood vessels that supply the penis. Viagra and Cialis improve blood flow to the penis by relaxing the smooth muscle cells, which results to the dilatation (widening) of blood vessels. However, both drugs rely on the substance nitric oxide (NO) to work. NO is only released following sexual arousal. Without physical or mental sexual stimulation, PDE5 inhibitors will not work.

The role of nitric oxide in penile erection

With the help of an enzyme called guanylate cyclase, nitric oxide promotes the production of cyclic guanosine monophosphate (cGMP), which is primary responsible for the process of erection by regulating the amount of blood that goes in and out of the penis. But cGMP is normally degraded by another enzyme called phosphodiesterase type 5. Cialis and Viagra block the action of PDE5 to prevent the destruction of cGMP, so that it can stay longer, prolonging the engorgement of the penis. Coadministration with nitrate-containing medications is dangerous for Viagra and Cialis because they can increase the hypotensive effects of nitrates.

Having the same mechanism of action means sildenafil and tadalafil have similar adverse effects. Common side effects associated with these ED drugs include: facial flushing (reddening), headaches, stomach pain, diarrhea, nausea, dizziness, and visual disturbances. Cyanopsia is a lesser-known side effect of Viagra. It is characterized by seeing everything tinted with blue; hence, it is also referred to as blue vision. Cialis does not cause blue vision because it specifically inhibits PDE5. Viagra also inhibits PDE6, which is found in the retina. On the contrary, muscle pains are only experienced by Cialis users and not Viagra patients.

Some men with ED have found symptom relief by incorporating lifestyle changes and treating an underlying medical condition, such as high blood pressure. Those who do not respond to a simple lifestyle change may benefit from ED medications. Right now, PDE5 inhibitors are the first-line treatment for erectile dysfunction. Cialis is the only drug approved for the treatment of both ED and benign prostatic hyperplasia or prostate enlargement.

For ED, Cialis and Viagra are taken orally before planned sexual activity. The recommended dose for Cialis is 10mg to be taken as needed, at least 30 minutes before sexual activity. A low dose of 5mg once daily can also be used for benign hyperplastic hyperplasia and those who anticipate frequent sexual activity. Do not take a higher daily dose of Cialis without consulting your doctor. The usually prescribed dose for Viagra is 50mg to be taken as needed, at least one hour before planned sexual activity. Avoid taking Viagra with a high-fat meal, as it delays its absorption. Cialis can be taken with or without food, but it’s better to take it on an empty stomach if you want faster absorption and earlier onset of action.

The success rate for both drugs is approximately 70%. Compared with Cialis, there is extensive data available for Viagra composed of thousands of peer-reviewed articles, while there is limited data on Cialis. Simply put, Viagra has an excellent track record being the first PDE5 inhibitor to be released in the market. But, the long half-life of Cialis (17.5 hours) is noteworthy. A single dose of Cialis would still be effective after a day or so.

Birth Control Pills (BCPs) And The Summer Of Love

Health & Wellness
In the previous article on contraceptives, “To Be or Not to Be—That is the Contraceptive,” the methods of preventing pregnancy were listed and described. But none of them has changed the world the way the oral contraceptive—or “birth control pill” (BCP)—has.   The Combination Pill and the Progesteron-only Pill (POP) Ingredients—one scoop or two Two types of pill have been marketed. The more popular version is called the “combination pill,” because it has both an estrogen and a progesterone, the main female hormones involved in the menstrual cycle and ovulation. For women who cannot take estrogen, the progesterone-only pill (POP) was developed.   Party on! Adventures in promiscuity and sexual experimentation To say “the pill” was a revolution is an understatement. It was introduced first in the 1960s, and along with daring and provocative music, changing concepts of morality, and the hippie ...
Explore

What Is Erectile Dysfunction and How To Treat It?

Health & Wellness
Did you know that every 1 out of 10 men in the world suffers from erectile dysfunction? If you are one of them, you need not suffer alone. In this article, we will talk about the problem that has overshadowed many relationships around the globe. About Erectile Dysfunction Commonly known as impotence, erectile dysfunction (ED) is a sexual disorder that is characterized by persistent trouble getting or maintaining an erection that is sufficient to engage in sexual activity. The disorder affects many men over the age of 50, although a significant increase in the risk of ED in the younger male population has been noticed over the past couple of decades. Read more about age and ED in our article Erectile Dysfunction and Aging. ED is among one of the most common causes of relationship troubles. What is even more troubling is the fact that only about 33% of men affected by ED actually seek medical help for the treatment of erectile dysfunction. Causes of ED A number of factors lead to ...
Community Articles