How Long Does Luvox Take to Work?

How Long Does Luvox Take to Work? 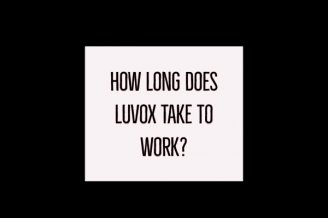 Luvox (fluvoxamine maleate) is an antidepressant indicated for the treatment of obsessions and compulsions in adult and pediatric patients with obsessive-compulsive disorder (OCD). It can also be used to treat major depressive episode, panic disorder, social anxiety disorder, post-traumatic stress disorder (PTSD), and bulimia nervosa. Antidepressants are known to have a delayed onset of action. Fluvoxamine may start to work within two to four weeks. Some studies suggested that it is possible to achieve clinical improvement by the end of the first week of treatment.

This antidepressant is available in a 25mg, 50mg, and 100mg tablet. If you are suffering from OCD, your doctor may prescribe an initial dose of 50mg tablet to be taken at bedtime. The maximum dose for fluvoxamine is 300mg per day. If side effects are well tolerated, your dose may be increased every four to seven days. Daily doses exceeding 100mg must be divided throughout the day.

Fluvoxamine belongs to the group of antidepressants called selective serotonin reuptake inhibitors (SSRI). In the history of antidepressive agents, none has reached the same level of popularity as SSRIs. The approval of Prozac (fluoxetine) in 1987 brought antidepressants in the limelight. One out of six Americans take daily psychiatric drugs, according to a study published in the Journal of American Medical Association. About 12% of these medications are antidepressants. Despite the development of newer antidepressive agents, the conventional wisdom on its delayed onset of action remains. The National Institute for Health and Clinical Excellence (NICE) has issued a statement for prescribers that patients must be informed about the delay in onset of effect when taking antidepressants.

It was believed that it takes two to three weeks before an antidepressant medication shows pertinent effects. Taylor and colleagues challenged this idea in a systematic review and meta-analysis of randomized trials, which aims to establish if an early response to SSRI treatment is possible. The authors found 28 trials with 3,618 participants who received SSRIs and 2,254 who were given a placebo. Using data from week one to six, the authors found that symptomatic improvement in the SSRI group occurs by week one and continues for the following weeks, albeit at a declining rate. The authors concluded that early response to this group of antidepressants might represent a true response and not just a placebo effect.

Why antidepressants take time to work

There is no consensus on why the antidepressive effects of these drugs take some time to become apparent. In the case of SSRIs, the most widely used class of antidepressants, increasing the synaptic levels of 5-hydroxytryptamine (5HT) or serotonin only takes hours or days, but therapeutic response is delayed by weeks or months. Blocking the reuptake of 5HT causes the downregulation of 5HT1A receptors through negative feedback. This process takes time since downregulation of the said receptors is an adaptive response. However, newer drugs that act on 5HT4 receptors have shown rapid antagonistic effect in animal models. Even at postsynaptic level, 5HT4 receptor inhibition lead to rapid and significant response. Another study by Mendez-David and colleagues have shown that 5HT4 activation is important in fluoxetine’s anxiolytic and anti-depressant-like effects. This proves that acting on these receptors for a rapid onset of therapeutic effect could be the next target of novel antidepressants.

What to expect when taking Luvox?

Fluvoxamine was the first SSRI to be approved for the treatment of obsessive-compulsive disorder in children. Low levels of 5HT have been associated with depression and anxiety, as well as panic disorder, OCD, and other mood disorders. In the gut, low levels of serotonin may cause irritable bowel syndrome, bone problems, and even cardiovascular disease. As its name implies, SSRI prevents the reuptake or reabsorption of serotonin back into the nerve endings. Compared to other antidepressants, it has little effect on dopamine and norepinephrine uptake systems. Simply put, SSRI increases the levels of serotonin in the brain, which in return, provides a “feel good” effect. Yet the effects of antidepressants like Luvox is not immediate. While it’s possible for some patients to notice improvement of symptoms in the first week of treatment, it may take weeks or months for other people to respond to the medication. That’s why it’s important to stick with your meds with or without symptom improvement. There are valid evidence supporting the claims that SSRIs have better safety profiles than other class of antidepressants, such as MAO inhibitors and TCAs. But your doctor will most likely put you in a low starting dose to prevent side effects, and more importantly, to avoid discontinuance.

Health & Wellness
So what’s in a name? “A rose by any other name would smell as sweet.” 1 Rosa molineaux is a deep pink fragrant rose species. Rosa molineaux is its scientific botanical name. Its “generic” name would probably just be “pink rose.”2 How medications are named Likewise, every medication has different names that refer to the same thing. In pharmaceuticals, the number of names is three: Chemical name: the actual molecular name Generic name: the name given to that molecule that is the active ingredient of any medication. Trade name: the “brand” name of the medication given by the company who has the patent on the generic. It is usually based on marketing and uniqueness.   An example3: Chemical name: 2-(4-Isobutylphenyl)propanoic acid. Generic name: ibuprofen. Trade name: Advil; Motrin.   No one says, “Hey, while you’re at the drugstore, pick me up a bottle of 2-(4-Isobutylphenyl)propanoic ...
Explore

Health & Wellness
Treatment for General Anxiety Disorder The definition of general anxiety disorder, “GAD,” is an exaggerated state of persistent worrying that is uncontrollable and impairing, occurring more than 50% of the time over at least 6 months. It is often accompanied by distress, apprehension, mood irritability and even physical manifestations, such as fatigue and muscular tension.1 There is evidence that the biochemistry of the brain is heavily involved, including neurotransmitters.2,3   Treatment   Treatment for GAD involves identifying and addressing the following:   Genetic factors Neuropsychological factors Developmental and personality factors   Genetic factors are already done and can’t really be undone. However, identifying a family history will help identify other co-morbidities that will affect treatment. For example, if a major depression figures prominently in a parent, clues to the same, well-hidden before learning the f ...
Community Articles