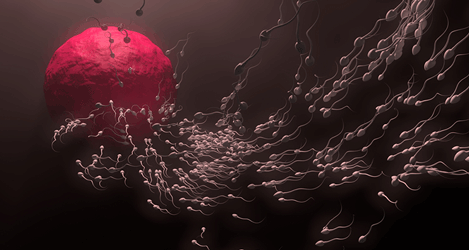 If you are trying to get pregnant you will need to know how to recognize the signs of ovulation. This occurs when the ovary is prepared for pregnancy and releases an egg, during the ovulation period the woman in most fertile. Some find it hard to recognize the signs, but if you know what to look for the process is a lot easier. You should first learn your cycle as this will make it easier. The myth is that all women have 28 day cycles and this is not the case. The American pregnancy association explains that women ovulate between day 11 and day 21 of their cycle. There are two parts to the ovulation cycle; the first half is known as the follicular stage and the second half is the luteal phase. The most common physical signs are; increase in body temperature and cervical mucus, abdominal cramps, tender breast and an increased libido.

These are just some of the most obvious signs of ovulation. During this time there is a change in body temperature. Many people use a basal body temperature test. However, this can only measure the temperature after ovulation so it is unable to predict when ovulation will transpire in a given cycle. It is best to use a regular thermometer. Abdominal cramp is also a way of recognizing the ovulation signs. Some women experience pain in the lower abdomen, this is known as Mittelschmerz and means 'middle pain' in German. Although in some cases this pain can last up to three days, generally they usually subside within a few hours.

An increase in cervical mucous is also a sign of ovulation. You will need to examine the mucous in order to tell whether or not you are ovulating. Before the ovulation period, there will be dryness surrounding the vulva; this means there is very little chance of conceiving. When you are approaching ovulation, the discharge has a cream or white color and is moist. During the ovulation period, the mucus appears very thin and clear and during a 'finger test' the mucous should be able to stretch up to several centimeters before breaking. This is the time when the chances of conceiving are highest.

Another way to tell if you are ovulating is by detecting the position of the cervix. The cervix will be low making it easy to reach and the entrance will feel closed during the first half of your cycle. The cervix will become soft before ovulation, opening the entrance of the cervix. However, during the peak of ovulation the entrance will be harder to reach with your finger as the entrance increases to its maximum. During this time many women also experience an increase in sexual desire. This makes sense simply because the main purpose of ovulation is to get pregnant. The body therefore prepares itself for intercourse, which may be why there is an increase in libido during this period. These are just a few of the ways in which you can recognize the signs of ovulation, a doctor or physician may have more information on this issue.

Health & Wellness
Most complications that occur because of drugs mixing badly will occur while a patient is in the hospital. This is just a matter of the environment because the hospital is where the sickest patients go. The sheer volume and assortment of drugs increase the risk of an adverse drug event (ADE). Patients in the hospital are likely to be exposed to the newest medications as their diagnosis progresses during their admissions. Even though there are drug-interaction monitors in electronic health record (EHR) programs and a dynamic pharmacy, the sheer number of medications and the rapid introduction of newer marketplace medications not yet in the database puts these patients at risk for suffering an ADE. What about outside of the hospital? In the hospital, there is only one chart, so all the medications will be listed together. In the out-patient setting in private practices and clinics, patients who go to different doctors will have their entire roster of medications spread out ...
RELATED ARTICLES

How To Help Someone With Depression – The Definitive Guide

Arthritis: What are the most common forms of arthritis?

Health & Wellness
Inflammation and pain in the joints, or arthritis, can be caused by many things. The CDC estimates about 23% of all adults have been diagnosed with some form of it. In fact, 12% of people in the USA suffer with arthritis chronically. According to the Arthritis Foundation, there are over a hundred different forms of arthritis and related diseases. Psoriasis, bacterial infections (e.g., gonorrhea), viral infections (e.g., hepatitis B, Chikungunya), lupus, scleroderma, Lyme disease, bursitis, fibromyalgia, and gout can all cause arthritis, making diagnosis challenging. Arthritis has a severe economic impact due to lost employment days and lost wages and a psychological impact due to its negative influence on quality of life. Untreated, it can only get worse, resulting in permanent joint damage and a lifelong ordeal of suffering. What are the most common forms of arthritis? The top two types of arthritis, comprising 90% of all arthritis diagnoses, are osteoarthritis, which ...
Community Articles