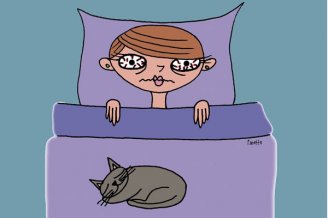 Doxepin is a tricyclic antidepressant (TCA) belonging to a class of psychotherapeutic agents known as dibenzoxepin tricyclic compounds. It is originally approved for the treatment of mood disorders such as anxiety and depression. In March 2010, low dose doxepin was granted US FDA approval for the treatment of insomnia characterized by sleep maintenance difficulty. This medicine may help improve your mood, increase your energy level, relieve anxiety, and help you sleep better. This guide does not contain all information about Doxepin, whether for mood disorders or insomnia. There are different formulations for each indication, so read the medication guide provided or consult your nurse, doctor, or pharmacist before taking Doxepin.

The exact mechanism of action of doxepin is still unclear. It is believed that it blocks the brain from reabsorbing a neurotransmitter called norepinephrine, one of the chemical messengers that regulate mood and behavior. Norepinephrine, being an excitatory (stimulating) neurotransmitter, is associated with alertness and energy. Serotonin, sometimes referred to as the “feel-good” chemical, is associated with positive feelings of wellbeing. Anxiety, depression, and other mood disorders are thought to be related to imbalances with these chemical messengers. Doxepin increases the levels of norepinephrine in your body, which may help improve your mood.

Silenor (low dose doxepin) is an H1 antagonist or histamine 1 blocker. H1 antagonists are typically used to relieve allergic reactions, but they also have sedative properties. Histamine regulates the sleep-wake cycle. It increases wakefulness upon release. Doxepin blocks histamine release and promote maintenance of sleep up to 8 hours a night. Doxepin (Silenor) is the only sedating antidepressant approved by the FDA for treating sleep-maintenance insomnia.

How to take Doxepin

Take a dose exactly as prescribed by your doctor. Consult a medical practitioner or pharmacist if you are not sure how to take Doxepin.

Things to know before taking Doxepin

In a random double-blind study, comparing the therapeutic effect and safety of doxepin and alprazolam among 126 outpatients with primary unipolar depression, both drugs were found to be equally effective, with lower incidence of side effects in the alprazolam treatment group. Doxepin has also been found to be effective among patients with chronic pain and depression. Significant improvement was reported after six weeks at a dosage of 200mg/day. Clinical experience and literature have shown that doxepin is safe and well tolerated, even in the elderly patients.

The effects of Silenor have been studied in older patients (18–64 years old) with primary insomnia, with well-tolerated effects and improvement in objective and subjective sleep maintenance. A review of randomized placebo-controlled trials concluded that low dose doxepin “had a small to medium effect size against placebo for sleep maintenance and sleep duration but not for sleep initiation at both immediate and short-term post treatment.”

Health & Wellness
What is Copaxone? Copaxone® is the trade name of a prescription drug containing glatiramer as the active component. Glatiramer is a drug used in the treatment of patients with relapsing forms of multiple sclerosis(MS), it is classified as an immunomodulating agent meaning it aids in modifying the manner in which the immune system works in multiple sclerosis patients. Copaxone® is manufactured by Teva Pharmaceuticals, Copaxone® is available as a pre-filled syringe solution for injection and is available in pack size of 12 x 1ml Pre-filled syringes. Active Ingredient Glatiramer is the active component of a the drug called Copaxone®, it is used in the treatment of MS, it’s actual mechanism by which it works is unknown however it is believed to work by modifying the body’s immune system which is known to be the cause (pathogenesis) of MS. MS inflammation in the spinal cord and brain is thought to be caused by defects in the body’s immune system. Gl ...
Explore

Health & Wellness
“It goes in, it must go out.” This axiom is known among cult followers of the comedy troupe, Firesign Theatre, as Teslacle’s deviant to Fudd’s law. Gleaning this one catchphrase from the comedy album by Firesign Theatre seems an appropriate, albeit pseudoscientific, way to start an otherwise scientific discussion on diuretics. It is a phrase that is emblematic, however, of your body’s way of keeping everything in balance, especially fluids. Just the right amount of hydration is as important as normal body temperature in allowing all of your physical reactions—both chemical and electrical—to carry on seamlessly. What does Diurese mean? Diurese means to simply loose fluid through urination. A diuretic, therefore, is a substance or drug that causes this to happen over and beyond what you can naturally do. There are many conditions that tend to build up your fluids or cause you to retain them, setting up a falling dominoes trail of worsen ...
Community Articles