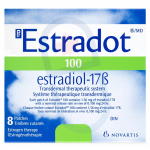 Why should I order Estradot 100 ug patches online from YouDrugstore?

What are the side effects of using Estradot 100 ug patches?

Typical side effects of using Estradot 100 ug patches include acne, dry eyes, dizziness, sudden mood shifts, shortness of breath, cramps, nausea, stomach upset, changes in vaginal discharge, a change in sex drive, spotting, nosebleeds, some confusion, and some changes in memory. Less typical but more serious side effects you could potentially experience include vaginal thrush, breast lumps, hair loss, hair growth, or an allergic reaction. An allergic reaction may include symptoms such as rash, vomiting, fever, hives, swelling, or red skin, and you should seek medical attention if these occur. If you have any concerns speak to your doctor.

When does menopause start? And what is osteoporosis?

Menopause is a natural part of a woman's life that typically begins around 51 years of age. However, the age when menopause begins has been known to vary greatly between the ages of around 30 to 60 years old. Menopause is when a woman's ovaries stop producing both eggs and estrogen, often causing many adverse symptoms. The symptoms of menopause include an irregular menstrual cycle, irregular bleeding or spotting, painful intercourse, vaginal dryness and itchiness, dizziness, hot flashes, a lack of energy, mood swings, weight gain, irregular heart beat, anxiety, breast pain, and problems urinating. Osteoporosis is disease that is characterized by a significant reduction in bone strength and bone mass, resulting in an increased risk for breaking. Osteoporosis is a major concern for women who enter into menopause or undergo a hysterectomy because bone strength and bone mass depend on estrogen.

Why are Estradot 100 ug patches prescribed to treat the symptoms of menopause and to prevent osteoporosis?

Who might receive a prescription for Estradot 100 ug patches from their doctor?