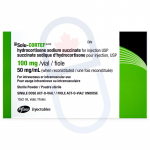 What is Solu-Cortef Act-O-Vial 100mg?

Solu-Cortef contains hydrocortisone sodium succinate which is part of a group of medicines called corticosteroids or steroids.

Your doctor may have prescribed this medication for a variety of reasons. Solu-Cortef contains hydrocortisone which reduces your body’s natural immune response and decreases inflammation and swelling. Therefore, it may help with various conditions such as severe allergies, arthritis, skin disorders and intestinal disease. This medication is also prescribed to patients who do not produce enough steroid hormones naturally, such as people with the condition known as Addison’s disease. As well, Solu-Cortef is used in emergencies when fast treatment and a high dose of hydrocortisone is necessary.

Your body produces steroid hormones naturally in your adrenal glands, which sit on top of your kidneys. Corticosteroids is a class of drugs which mimic the effects of these hormones. Solu-Cortef contains hydrocortisone sodium succinate which belongs to this class of medicine. Corticosteroids weaken your immune system's natural response to various diseases and decrease the associated symptoms such as inflammation and swelling.

How and when to take Solu-Cortef Act-O-Vial 100mg

The white powder and the sterile water are contained in two separate sections of the Act-O-Vial. After they are mixed, a needle is inserted to withdraw a dose which is injected intravenously or directly into a muscle. Depending on your condition, the doctor will decide the dosing and then will likely reduce it when your symptoms have improved.

Some of the side effects below may occur with Solu-Cortef:

These may not be all the side effects of Solu-Cortef Act-O-Vial 100mg.

Do not use this medication if you have:

If you or your child is exposed to measles or chickenpox during treatment with Solu-Cortef, contact your doctor immediately. Talk to your doctor before taking Solu-Cortef if:

How to store Solu-Cortef Act-O-Vial 100mg

Store at room temperature (15°C to 30°C) and away from light. Keep out of the reach of children. After the contents of the two compartments in the vial are mixed, dispose of any unused solution after three days.

Where can I buy Solu-Cortef Act-O-Vial 100mg

You can only buy Solu-Cortef if you have a prescription for it from a doctor. If you have already been given a prescription, you can order Solu-Cortef from YouDrugstore. We are a Canadian online pharmacy, where you can buy Solu-Cortef at the same price patients pay in Canada. All you have to do is register online at YouDrugstore.com and then send us your prescription. Once we have received your prescription and all of the necessary information our team of professional physicians and pharmacy technicians will review your order. Purchase Solu-Cortef from YouDrugstore and we will ship your order directly to your home address for a cheap cost in shipping. We also provide free shipping on any order over $100. Solu-Cortef is used to treat a variety of conditions like arthritis and intestinal inflammation.